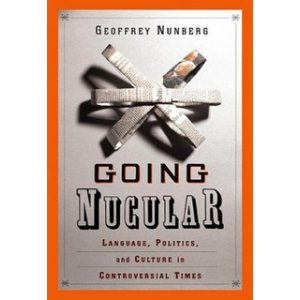 My book Going Nucular (PublicAffairs, 2004) was selected by Amazon.com as one of the 10 best nonfiction books of 2004 and as one of the “top 10 books of the year” by  January magazine and the San Jose Mercury News. It was also named best language book of the year by the Hartford Courantand listed among the year’s best language books by the Chicago Tribune and the Boston Globe.

As Nunberg’s title suggests, pronunciation can also be political: President Bush’s much-lampooned utterance””nucular”” could be either a nod to””Pentagon wise guys”” or a sly””faux-bubba”” gimmick to curry favor with some voters. While liberals don’t escape criticism, Nunberg unleashes his well-chosen barbs from a left-of-center perch. Conservatives, especially pundits like Rush Limbaugh and Peggy Noonan, receive special scrutiny for what Nunberg says are the simplistic linguistic devices they use to appeal to their audiences. Nunberg avoids hasty conjectures, and the provocative clues scattered across these pages should alert readers to the””linguistic deceptions”” in their midst. – Publishers Weekly, 5/2004

It may seem like much ado about nothing, fretting about words changing their meaning, but words do matter in how we perceive our world. One only need recall the daily juggernaut of advertising to know words are effective. Daily life and media blather may be comprised of more thoughtlessly applied words than is sweated-over ad copy, but consider the upcoming election, which may well turn on our subjective definitions of “security” and “patriotism” in a country now severely rechristened “the homeland.” – Pittsburgh City Paper, 07/2004