Nobody should need reminding that there’s more to the cultures of the lands South of the Border than just tequila and tacos. But people aren’t always aware that there’s more to them than just Spanish, too. That was brought home a few weeks ago by the heart-rending story of Jakelin Caal, or Jackie as people have been calling her, the seven-year-old girl who died of dehydration in U.S. custody a few weeks ago.

Administration officials denied they had any responsibility for the death. Shortly after he turned himself in to the Border Patrol, the girl’s father had signed an English-language form saying she had no health problems after it was explained to him in Spanish. And after that, they said, he’d been given plenty of opportunity to tell them about any changes in Jakelin’s condition.

But Jakelin’s father is a subsistence farmer from a remote area of Guatemala who has limited Spanish. His native tongue is the Mayan language Q’eqchi’, which has about a million speakers. Journalists weren’t sure what to make of that language. CNN and Reuters called it a dialect, a word that’s sometimes used loosely to suggest a substandard form of speech rather than a proper language.

But from a linguist’s point of view, that’s like referring to Russian as a Slavic dialect. Then there was the Washington Post story that called Q’eqchi’ “a pre-Columbian Mayan tongue,” as if it were the relic of a vanished civilization, rather than one of a family of languages spoken by six million people in Mexico and Central America. As one linguist pointed out, you may as well call English a pre-Norman-Invasion Germanic tongue. The fact is that the roots every language stretch back forever.

Okay, these are just a linguist’s quibbles. They certainly don’t diminish the quality of the reporting of this story. But they reflect a widespread cloudiness about the heterogeneous cultural and linguistic landscape in this part of the world.

Q’eqchi’, Mam, Quiché, Achi, and so on—those are distinct peoples, each of them with its own language, some with hundreds of thousands or even millions of speakers, many of them monolingual. Their literacy rates are generally low, but they have their own writing systems—in fact several of them are supported in the most recent release of Google Android.

Speakers of those languages have been migrating to the US for many decades, the majority legally. They’re fleeing poverty, repression, gangs and state-sponsored violence—the “Northern Triangle” of Guatemala, Honduras and El Salvador is reckoned one of the deadliest regions of the world.

Taken together, there are more speakers of Mayan languages living in the US than of Navajo, which is the most widely spoken North American indigenous language. The recent influx of migrants from the region has created the need for more interpreters—according to a 2017 Justice Department report, the Mayan languages Mam and Quiche are among the languages most often heard in immigration cases, ahead of French, Bengali and Korean. Border agents are supposed to make use of interpreters when they have communication problems, often over the telephone, but the procedures aren’t always followed. When Homeland Security Secretary Kirstjen Nielsen was asked at a House hearing in December whether an interpreter had been called for Jakelin’s father, she sidestepped the question and said only that the agents had done all they could. 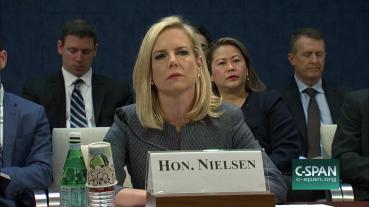 In fact in its public communications, the DHS seems to suggest that a knowledge of Spanish is all that border agents need to do their jobs. In a press conference last June, Secretary Nielsen boasted that “All US Border Patrol personnel in the Southwest border are bilingual—every last one of them.” It’s true all agent trainees are required to take an eight-week Spanish course as part of their training program, and many speak it better than that.

But that may not suffice when it comes to obtaining medical information or explaining an English-language form to somebody who speaks only market Spanish and may be illiterate in the bargain. A 2014 report by public health consultants found that half of the adults detained at the Arizona border didn’t get an explanation of the legal papers they signd in a language they understood. With all the opportunities for miscommunication, It’s not surprising that Jakelin’s father and the Border Patrol agents have given very different accounts of what he told them about his daughter’s health. When I talked to the University of Arizona linguist Robert Henderson, who works on these languages and is a co-founder of an organization called the Maya Health Alliance, which provides health services in the region, he told me that even those Q’eqchi’ who speak some Spanish aren’t up to using it when the topic turns to medical or legal questions.

Why doesn’t Secretary Nielsen bring up the problems of indigenous language groups when she’s talking about border security and the wall in press conferences and to Congress? Maybe because there’s no place for them in the Administration’s narrative. The wall is about the Hispanics who are threatening to infest American communities with “gangs, drugs, human trafficking and massive crime,” as the president put it in a recent tweet—all the malign stereotypes that are packed into the single phrase “bad hombres.” But indigenous groups like the Q’eqchi’ and the Mam don’t conjure up the same baleful specters. In fact those peoples aren’t Hispanics in the first place, no more than Inuits and Navajos are Anglos. Never mind that people like Jakelin’s father aren’t bad, they’re not even hombres.